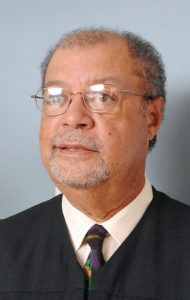 The Honorable Judge Fred Jerry Fisher wrote the final chapter of his life, softly closed the book, and went to his eternal home to be with the Lord on Wednesday, September 8, 2021. Funeral services were held on Saturday, September 18 at 10:00 a.m. Active pallbearers were Shon Cobbins, Woodley D. Fisher, Jr., Johnny Forrest, III, Devin Pargo, Roy Redmond and Michael Stringer.
“Jerry”, as he was affectionately called, was the third of four sons born in West, MS to the union of Claudine and the late Augustus “A.G.” Fisher on July 9, 1949.
At an early age, Jerry accepted Christ as his Lord and Savior and joined Martin Grove United Methodist Church in West, MS. In his adult life, he later joined and became a devoted member of The First Baptist Church of Algiers in Walker, LA where he served until his death. Jerry frequently spoke of the day when the Lord saved him and changed his life forever. He continued to reflect on this change throughout his life until he was called home to be with the Lord.
Jerry’s favorite scriptures were from Matthew 11:28-30 28“Come to me, all you who are weary and burdened, and I will give you rest. 29Take my yoke upon you and learn from me, for I am gentle and humble in heart, and you will find rest for your souls. 30For my yoke is easy and my burden is light”.
Jerry completed his early education in Holmes County, MS and graduated from Lexington Attendance Center in 1968. He received his B.S. in Social Science in 1972 and his master’s degree in Reading in 1978 from Jackson State University (JSU).
Jerry started his career as an Educator in the Holmes County School District where he taught Social Studies and Reading until his retirement in 2004. He loved teaching and was dedicated to making a difference and being an inspiration to students.
In 1980, Jerry became a Justice Court Judge for Holmes County, MS where he served for 36 years until his retirement in 2015. He reviewed and fairly presided over cases for citizens of Holmes County. He was a life-long scholar who participated in continuing education classes throughout the course of his service as a Justice Court Judge and remained an active member of the National Judges Association. Being a public servant, helping others and interacting with people are what Jerry loved most about being a judge.
Jerry had a quiet demeanor, yet was a community activist and trailblazer for citizens of Holmes County. He was a pillar in the community and a strong supporter and contributor to the Martin Grove United Methodist Church Building Fund.
At an early age, Jerry learned to be an entrepreneur from his father and grandfather. He owned several businesses including a mini-storage rental facility, sports and events complex, and cattle farming. Jerry was a sports enthusiast who was a loyal “Tiger” football fan to his alma mater, JSU. Over the years, he received many awards, acknowledgments, and accolades for his years of service and hard work.
Jerry leaves to cherish his precious memories, his beautiful and devoted wife Eartine “Bonnie” Fisher; his loving mother Claudine Fisher of Lexington, MS; his three children, Gary (Gretchen) Fisher Redmond of Pearl, MS, Kayla Fisher Dallis, and Marcus Fisher of Lexington, MS; three grandchildren, Shalecia, Austin, and Devin Redmond; brothers, Edsel (Elaine) Fisher of Lexington, MS, Woodley Sr. (Maxine) Fisher of Madison, MS, Raymond (Margaret) Fisher of Houston, TX; three uncles, Mack Fisher, Woodley Hudson, and Fred Hudson; one aunt, Connie Heffner; and a host of nieces, nephews, cousins, other relatives, and friends.
The family of the late Fred Jerry Fisher wishes to acknowledge with sincere appreciation the many comforting messages, floral tributes, prayers and many other expressions of kindness and concern evidenced at this time in thought and deed.