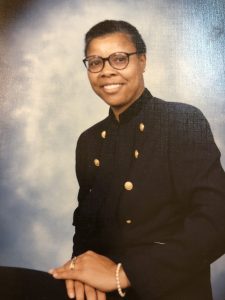 Shirley who was affectionately called “Shelly” was born in Vaughan, Mississippi June 21, 1951. She was the third of eight children born to the union of West and Ruthie Mae Sanders in Vaughan, Mississippi. Shirley passed away peacefully Thursday, November 4, 2021, at the University of Mississippi Medical Center (UMMC). Both of her parents and her brother, Jonathan “Man” Sanders preceded her in death.
She accepted Christ at an early age and was baptized at Union Paradise African Methodist Church in Vaughan, Mississippi. Shirley always had a heart for God and His people.
Shirley spent her early years growing up in Vaughan, Mississippi where she attended St. Francis Catholic School. In 1965 her family moved to Ebenezer, in Holmes County, Mississippi where she attended and graduated from Lexington Attendance Center (L.A.C.) in 1969.
After graduating from high school, Shirley relocated to St. Joseph, Minnesota where she attended the College of St. Benedict and earned a Bachelor of Science in Business.
After graduation, she worked as a fashion buyer for Dayton-Hudson Department Store in Minneapolis, Minnesota for several years before pursuing her childhood dream.
She had always dreamed of becoming a doctor as a child because poor black families like hers had little or no access to doctors or health care. It was then that she set her sights on attending Mayo Medical School in Rochester, Minnesota and the rest is history.
In 1985, she married her friend and classmate, Alan Van-Norman, M.D. Shirley was the only African American to graduate from Mayo Medical School in 1985. After medical school, she would train and practice medicine in California. The untimely death of her baby brother, Jonathan “Man” Sanders in 1991, made her reevaluate her true calling in life.
In 1995, Shirley and Alan were blessed with a beautiful son, Weston Jonathan Sanders. She now knew true her calling, it was to be Weston’s Mom. She loved him more than life itself.
Shirley and Weston would later relocate from San Antonio, Texas to Thomastown, Mississippi, where she resided with Weston and their dog Termite until her death.
Shirley is survived by her beloved stepmother Otis Lee Sly-Sanders; her loving son Weston Jonathan Sanders; her loving siblings, Dorothy Sanders-Walls (Johnnie) Greenville, Mississippi, Lillie Sanders-Noel (Roosevelt) Pickens, Mississippi, Doris Sanders-Porter (Fulton) Madison, Mississippi, Betty Sanders, Ph.D., Lithonia, Georgia, Yvonne Sanders-Butler, Ed.D., Madison, Mississippi, (Floyd) Annette Sanders-Roberts, Ed.D. (Kenny), Madison, Mississippi, Terrence Williams, New Orleans, Louisiana and Luke Jefferson (Linda) Pickens, Mississippi; thirteen nieces and nephews; twenty-four great nieces and nephews; and three great, great nieces and nephews, a host of cousins, three God-siblings, Rose “Danny” Johnson, Jacqueline “Jackie” Brown, Barbara Ann Brown, and Albert Brown.
The family of Shirley Cornelius Sanders sincerely appreciates the many comforting messages, prayers, love, and expressions of kindness shown toward our family. We would like to thank the staff and amazing nurses at the University of Mississippi Medical Center, the Bone Marrow Transplant Unit (BMT)-Shelby, 5 South-Jacob and the UMMC Jackson Medical Mall.
Thank you to all of the staff and nurses at Sta-Home Health Care and a heartfelt thank you to nurse Missy. Shirley said, “God knows that I have a huge medical battle ahead of me and you sisters are holding the line, (laughing) but you all are going to need some reinforcement. In His infinite wisdom, God not only sent me a world class rural home health care nurse to care for me, but He sent me a “True Warrior “in my Missy and for that I am grateful.”
A Blessing from the Lord, thank you, Cynthia Arnold of the Mississippi Blood Service (MBS) who assisted our family in setting up the Shirley’s Direct Donor program but went beyond the call of duty to support Shirley. THANK YOU! Family, friends and acquaintances who donated or wanted to donate blood and platelets to provide our beloved Shirley comfort during her journey.
Funeral arrangements were entrusted to Porter & Sons’ Funeral Home, Lexington, MS. Funeral services were held on Saturday, November 13 at 11:00 a.m. at St. Paul AME in Madison with Elder Floyd Butler officiating. Interment was in Liberty Parks, 810 Madison Ave., Madison.