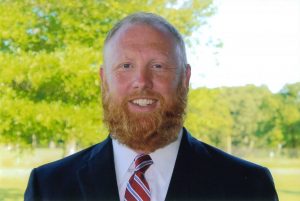 Stephen Warren Forrester, age 45, resident of Somerville, Tennessee and husband of Rebecca Ellis Forrester, departed this life Wednesday morning, October 20, 2021, in Nassau, Bahamas.
Stephen was born August 20, 1976 in Memphis, Tennessee to the late Lawrence Warren Forrester and late Sandra Kay Jordan Forrester. He was an Eagle Scout and a 1994 graduate of Fayette Academy. Stephen was a 1998 Union University graduate with a degree in Economics and Finance. On May 31, 2003, Stephen married the love of his life, Rebecca Ellis. They created a life full of special memories together. If you knew Stephen, you know that life with him was all about laughs and good times. He had a smile that radiated happiness and a laugh that was contagious. He was tender-hearted, quick-witted, and always had the right words to characterize any given situation. He was sincerely interested in others and wanted to see his friends achieve their goals. He was the best friend everyone wanted in their lives.
Stephen and Rebecca moved to Somerville, Tennessee in June of 2003 and he began his career with his parents at Forrester Appraisal Service. Stephen loved to travel and as their family grew, it was important to Stephen for their girls to experience the fun times that come with family trips. While Stephen maintained meaningful relationships, nothing was more important to him than his family. He loved a good meal at any restaurant, a night out with Rebecca and friends, and special dates with his daughters. Stephen loved nothing more than family trips, watching the girls play basketball or time together at home. He taught his children compassion for others and instilled in them high standards. Those family times were the parts of his life that made him the happiest. Stephen and his family attended Somerville First Baptist Church, where he was a deacon and an active member who served where needed. Throughout the years, he was a vital part of the church leadership team, even serving as the interim youth minister on multiple occasions. The youth of the church were near and dear to his heart. He poured into their lives and made church a desirable place to come and build relationships. Stephen was also a coach and referee for the Upward Basketball league at church. He had a passion for serving on mission teams and took several trips to Haiti with Hickory Withe Baptist Church. He loved the people of Haiti, their culture, and the Haitian Creole language. Stephen had a gift of learning languages and enjoyed speaking Spanish and would do so any chance he had. It could be ordering food at a Mexican restaurant or communicating with the Spanish speaking community at church. He enjoyed interacting with different cultures and wanted his children to see the importance of sharing that same love for others. He enjoyed hunting and even took his girls on hunting excursions. Tennessee Football was another favorite pastime. Stephen was a member of the National Association of Appraisers and most recently began teaching Qualifying and Continuing Education with Reynolds and Associates. He was active in the appraisal industry and continued to give back and contribute what he could to make that industry a better career path for others.
Stephen is survived by his wife, Rebecca Ellis Forrester; his two daughters, Mary Agnes Forrester and Phoebe Ellis Forrester; his uncle, Jimmy Jordan (Brenda) and his in-laws, Stanley and Pat Ellis, all of Somerville, TN. Stephen was preceded in death by his parents, Lawrence Warren Forrester and Sandra Kay Jordan Forrester.
Services for Mr. Forrester were held at 11 A.M. Monday, November 15, 2021 at First Baptist Church in Somerville, Tennessee with Bro. Stan Smith, pastor of the church, officiating. Interment followed in Evergreen Cemetery in Williston, Tennessee. A visitation for Mr. Forrester was held from 5 to 8 P.M. Sunday, November 14, 2021 at the Peebles West Funeral Chapel near Oakland, Tennessee.
Consistent with Stephen’s love for the youth of our community, the family has requested memorial contributions be directed to: Fayette Academy, 15090 US Highway 64, Somerville, TN 38068 or First Baptist Church Somerville, attention: youth or missions, 12685 South Main Street, Somerville, TN 38068 or SMI Haiti, 8327 Haggard Court, Martinsville, IN 46151, www.smihaiti.org.