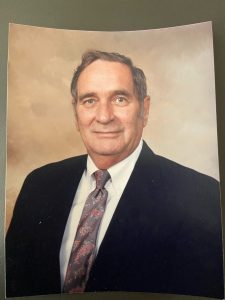 Buren T. Batson Jr., 89, born November 10, 1932, raised in Greenville N.C. passed peacefully at his home in Lexington, MS on February 7, 2022.
Major Buren was born to Buren T. Batson and Mary McDonald Batson. Buren, known as “Ted”, attended and graduated from Greenville High School in 1951 and joined the United States Air Force in 1952. He obtained the rank of Sergeant while serving with the 1st Pilotless Bomber Squadron at Patrick AFB in Florida, as a Guidance Radar Technician. Ted served 4 years active duty before entering reserve to further his education at East Carolina University earning a B.S. in Mathematics and Science.
Returning to active duty with the USAF in early 1960, Ted was commissioned Second Lieutenant and assigned to Keesler AFB where he met and married Inez Lundy Batson in December, 1961. Ted and Inez were stationed in Tokyo, Japan soon to move to Kadena, Okinawa. His next assignment would bring him to Headquarters, in Washington D.C., as Special Agent Buren where Ted was Chief, Operations Branch, Technical Services Division. He aided in improving the worldwide audio countermeasures program, and helped eliminate potential problem areas within the division.
Later was assigned to Thailand where Ted was Chief of Technical Services Division, Air Force Office of Special Investigations, and awarded the Bronze Star for his efforts in successfully completing special investigative missions assigned to him (Son Tay Prison Raid Nov. 20/21,1970). His last assignment brought he and Inez back to Bossier City, LA to Barksdale AFB where he would retire from the USAF in 1977.
After his retirement from the USAF, he attended MS College and received his law degree in 1980. He opened a private law practice in Lexington, where he and Inez worked together until 1995, when Ted moved into the role of Assistant District Attorney for 16 years.
Ted had many adventures throughout his lifetime and loved to tell anyone that was willing to listen. He loved his country and the people he served with while in the USAF; his church, his family and friends without conditions, and he loved life to the fullest.
He is survived by loving family, and friends.
Ted is preceded in death by his father Buren T. Batson, mother Mary McDonald Batson, sister Mary Brooks (Harvey), two nephews and his loving wife of 50 years Inez L. Batson.
Graveside service was held at Odd Fellows Cemetery in Lexington, MS on Saturday, February 12, 2022 at 10:00 a.m.
In lieu of flowers, donations can be made to First Presbyterian Church, P.O. Box 127, Lexington, MS 39095, or a charity of your choice.
Pallbearers were Thad Henley, Mark Henley, Jay Henley, Oakley Sumner, Franky McCrory, and Strider McCrory
Honorary pallbearers were Leroy Riley, Willie March and Holmes County Sheriff’s Department, James Powell, and the Elders and Deacons of the First Presbyterian Church of Lexington, MS.