William L. Spell Jr.
On September 17, 2022, William L. Spell Jr., better known as “Bubba Jr.”, was called to heaven. He was 53 years old born on March 31, 1969, to William L. Spell Sr. and Madelyn Harthcock Spell of Lexington, MS.
He is survived by his wife Angela Parnell Spell. They had been happily married since August 1, 1992. He is survived by his daughter, Brett Spell Clark, her husband Grey Clark, and his son, Lane Spell. He is also survived by his sister, Rhonda Spell Langford, and a host of nieces, nephews, cousins, aunts, uncles, and friends.
He graduated from Central Holmes Academy in 1987 and went on to play football at Holmes Jr. College. He continued his education at Delta State University, where he received a Bachelor’s Degree in Criminal Justice in 1992. He retired as a Rails Inspector for the Mississippi Department of Transportation (MDOT) for 25 years. He was also the owner/operator of Spell’s Brushcutting Services.
During his life, he was active in Boy Scouts where he achieved the rank of Eagle Scout. He was active in 4H and enjoyed the activities of fishing, hunting, and rafting. He loved to “tinker” on multiple projects and go “wandering” taking us on many adventures.
His legacy includes, not just his children and family left behind, but his spirit of volunteerism with Central Holmes Christian School, 4H, the Coxburg Community Center, and Boy Scout Troop 64. He was always there to help a neighbor in need. He will be missed by his family and community. 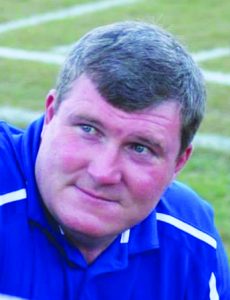