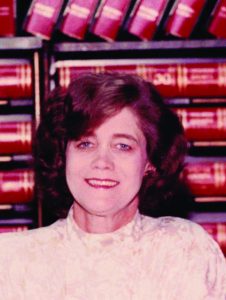 Jamie Tate Moore of Lexington, MS, passed away in Tyler, TX, on November 24, 2022 after a lengthy illness with peritoneal cancer. The only child of Frankie Heard and James Lewis Tate, she was born in Lexington on December 27, 1941.
At sixteen she graduated from Tremont High School as valedictorian and student body president. She then attended Itawamba Junior College, where she graduated with special honors and was named to the Hall of Fame. At age 20 she finished Mississippi State College for Women and began her teaching career at Murrah High School in Jackson, MS. Later in life, she received an MA in English from Mississippi College with straight A’s.
In 1962 she married Joseph Miles Moore of Lexington, and they were married for thirty years. They had an only child, Camella Maureen Moore.
She taught English in both the public and private schools of Holmes County for ten years. She was fortunate enough to retain friendships with many of her former students, and their visits were a great source of joy in her life, especially in her latter years.
In 1992, following her husband’s sudden death, she was appointed and then elected Chancery Clerk of Holmes County, a position she held for six years. The land record division was always her favorite part of the job. Also, during her tenure, there was a major courthouse renovation following a fire. She was blessed to have experienced, knowledgeable, devoted employees, who helped to make her job easier.
In 1996 she married John Richard Price, Jr., of Senatobia, MS, and lived in that area on a cattle farm for ten years, returning to Lexington in 2007, following his death.
She always had a deep and abiding love for Lexington and Holmes County. On several occasions during her life, she was the recipient of Lexington’s outpouring of love, and she never forgot those kindnesses. She was so blessed in her friendships, some of which lasted more than fifty years. Although she was an only child, for her entire life she was embraced and included by her first cousins, many of whom lived nearby.
She was a longtime member of First United Methodist Church of Lexington, and in 2012 she wrote and published an extensive history of the church. At that time she researched the family histories of those names on the 1897 stained glass windows. She found a real kindred spirit in the ladies of her church and was fortified by those friendships throughout her life. Although she had no musical ability, she found great joy and solace in the music presented every Sunday and often marveled that such a small church could consistently provide such music.
Throughout her life she enjoyed reading non-fiction, gardening, traveling, shopping for antiques, researching family history, delving into Holmes County history, and cooking.
She is survived by her daughter Maureen Moore Stone and her son-in-law, Dr. Charles Glenn Stone, Jr., of Tyler, TX, and her three grandchildren: Charles Glenn Stone III, Mary Tate Stone, and Hampton Burnett Stone, of Tyler. She is also survived by two step-children, John Richard Price III and Marilyn Price Whitworth of Senatobia.
During her illness the Lord placed the most amazing caregivers in her life. The family would especially like to thank the following people: Dr. Arielle Lee, Hope Cancer Center of Tyler, TX; Laura Whitteworth, NP, who provided excellent, compassionate care; and Ernest Wade, her caretaker, driver, and friend, whose devotion and help allowed her to remain in Lexington throughout most of her illness.
Visitation will be in the Fellowship Hall at the First United Methodist Church on Thursday, December 1, from 1:00 to 2:30 p.m. The service will follow in the sanctuary at 3:00 p.m., with the Reverend Jack Wooten presiding. Interment will be in Odd Fellows Cemetery, where five generations of her husband’s family are buried.
Charitable contributions can be made in her memory to Friends of Lexington Odd Fellow Cemetery  https://lexingtonoddfellowscemetery.com/friends or to the First United Methodist Church P. O. Box 157, Lexington, MS 39095.