Henry Hardy
In Loving Memory
Henry Hardy, 90, passed away January 3, 2023, at his residence in Lexington, MS.
Funeral services were 2:00 p.m. Friday, January 6, 2023, at Culpepper Funeral Home in Canton, MS. With burial to follow at Sharon Methodist Church Cemetery. Visitation was Friday from 12:30 p.m. until service time at the funeral home.
Henry Lynn Hardy was born November 1, 1932, to Henry Cleveland Hardy and Willie Lynn Wallace Hardy in Madison County, MS near Ratliff Ferry. He was the oldest of three siblings: his brother Robert and sister Alice. Henry attended Farmhaven School, graduating in 1951 as valedictorian of his class. He attended Holmes Jr. College in Goodman, graduating in 1953. After a brief tour in the Air Force, he returned to his studies at MS Southern College (now USM) at Hattiesburg, where he majored in accounting. Henry returned to Canton after his father’s death to help the family. He worked many years for MS State Hospital at Whitfield retiring after 35 years and returned to live with his mother in Canton. He continued a private tax service for many years.
Henry attended Sanctuary Pentecostal Church in Canton as long as his health permitted.
Henry was preceded in death by his mother in 1997 and his brother Robert in 2013, and brother-in-law Landon Abel in 2017.
Henry was always a devoted son and brother, and a good friend to all who knew him. A great joy to him was visiting his beloved USM campus, often as a birthday trip, and always enjoyed going to church and attending church and family gatherings.
Henry is survived by his sister Alice Abel of Holmes County, MS, sister-in-law Pat Hardy of NC, nieces, nephews, and cherished friends. 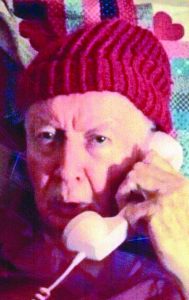